. German speciality chemicals firm Lanxess’s Rhein Chemie business unit will be showcasing new masterbatches from the Rhenogran product series. Aramid fibre masterbatches have previously been available in natural rubber, EPDM, NBR and CR matrices. These can also be used in IR, BR, SBR and HNBR, making them virtual all-rounders. New additives pre-dispersed in silicone rubber (Q) and fluorinated rubber (FKM) fill in the remaining gaps. Rhenogran P91-40/Q is particularly suited to the manufacture of high temperature resistant silicone items such as washers and seals. The silicone matrix and the aromatic polyamides in the fibres form a matched pair, especially when exposed to high thermal stress. Rhenogran P91-40/FKM can be used to manufacture rubber items for aviation with the ability to withstand high operating temperatures. Each of the new additives has 40% highly fibrillated pulp content, consisting of Twaron 1091 aramid fibres from Dutch firm Teijin Aramid.

. German chemical company Evonik will present its Vestenamer polyoctenamer additive, which allows waste rubber from discarded tyres to be processed for reuse in road construction, sports tracks or playgrounds. The reactivity and polymer structure of the Vestenamer additive leads to good network density between rubber particles, enhancing the compound’s mechanical properties, improving the cost effectiveness of processing and quality of the rubber parts, when rubber is recycled, says Evonik.

. Materials company Arlanxeo, which will be hosting the rubber street, will highlight new developments in the tyre and electric drive segments, such as new polymer architectures that improve tyre compounds to achieve reduced rolling and abrasion resistance while maintaining grip. These developments can support the driving range and decrease energy consumption of electric vehicles. It will also highlight research on innovative rubber grades for lithium-ion batteries, for shorter charging times, more power and greater range. Arlanxeo will also showcase new thermal management solutions to secure batteries from overheating, including heat and flame-resistant cables for charging, lightweight profiles, dampening and anti-vibration systems, brake systems or new performance wiper blades for camera-based autonomous driving.

. Germany-based tooling maker Günther will present its cold runners for silicone and LSR processing. Since LSR is a difficult material to work with as it is made from two components, giving it a low viscosity as it is injected into the hot mould, the tooling has to be accurate and built tight to avoid burrs. This is especially for the medical and automotive sectors that have low error tolerance thresholds. The company says its cold runner nozzles exhibit good thermal separation from the hot cavity plate, reducing heat transfer and preventing premature crosslinking — all nozzle heads are equipped with an insulation disc to ensure optimal thermal separation. Additionally, the nozzle shaft includes a sealing ring to protect against material leaks. Its portfolio includes the 5NEW80 single cold runner valve gate nozzle, the 5DEW80 single cold runner nozzle, the NTKW and NMW cold runner nozzles and the SMA 10 stepper motor for applications with up to four different needle positions per cycle.

. Ewikon will exhibit its new cold runner system for processing of LSR. According to the company, its micro-manifold technology is particularly suited for the production of parts with small-shot weights in moulds with a very high number of cavities. These systems are available as standardised hot halves for moulds with up to 192 cavities. Each micro-manifold features four screwed-in nozzle inserts and requires only one control zone. As such, the space required for wiring is considerably reduced to allow for an extremely compact mould design. Furthermore, part where the space has now been saved can be utilised to integrate additional support sleeves or domes that can be placed in the plate mould designs, making micro-manifold technology not only rather compact but also very stable.

. French machine maker REP will present rubber injection machines with associated 4.0 software. In the G10 Extended range, it will highlight the 160-tonne CMX1 with the 4.0 process-control system and the V410, with clamping forces from 160-1,000 tonnes. It will exhibit waste-free and flash-less moulding and the potential of operating within a 100% automated robotised cell. REP will also focus on its Pack 4.0 and how it allows networking of new machines and models of previous generations. It features real-time workshop supervision (REP Net 4.0); centralised mould parameters (REP Net 4.0); statistical Process Analysis (REP Net 4.0); remote assistance (REP Viewer 4G); predictive maintenance and the detection of wear and changes to performance (REP Predict); and communication with MES or ERP systems via OPC/UA.

. German machine maker Desma will demonstrate on four machines its Industry 4.0 highlighting automation, traceability and energy efficiency for simplifying the production of elastomer parts. It will show a production cell with data-integration of mixed batches, tracking the mould and cold runner systems via an integrated QR scanner and documenting the entire mixing data by mould history. Desma will also debut Smartrace, an advanced laser marking technology that enables reliable marking, even of black rubber articles, allowing for traceability of articles back to the respective cavity. Also on show will be a FlexCell system equipped with a six-axis robot for quick mould-alignment; an integrated air cushion system; and a collaborating robot system with 3D scanner protection that avoids the need for mechanical safety guards. Desma will also highlight a consulting and simulation programme for determining the optimal machine and tool design at the very early stages of a project. Another offering defines maintenance operations preventively to develop a spareparts strategy and prevent machine breakdowns.

. Germany’s Troester GmbH will present a 90 mm compact extruder for hose manufacture with an automatically centring double-crosshead, for enhanced material efficiency, better product tolerances and quicker set-up times. The unit can produce two layers simultaneously, each centred by servo-hydraulic systems that operate independently. Combined with a Sikora X-ray machine, the system automatically regulates the centricity of the extrudate. Meanwhile, Troester’s subsidiary X-Compound will present its kneading technology for uninterrupted production of compounds. The Swiss company specialises in machinery for conveying, melting, dispersing, mixing and degassing.

. Japanese/German machine maker Sumitomo (SHI) Demag will showcase the latest developments in LSR moulding of a component for a matrix light on a specially configured IntElect 130. It features 20% less energy and a new shorter motor design, with new types of spindles and enhanced ejector control technology. Other features are a specially designed screw, ranging from 14-45 mm, a modified plasticising unit, a shut off system specifically designed for LSR and a spring loaded non-return valve. Its low viscosity means there are advantages and challenges when processing LSR, with a tendency for flashes caused by excess material to occur at parting lines of the mould (where the two mould halves meet), or other shut off areas. Demag says these flash issues can be mitigated and controlled by addressing the mould clearance and with an integrated and controlled vacuum system within the machine can help to prevent air bubbles or burn marks. Additional features, such as a stiff platen ensures high rigidity and uniform distribution of the clamp force to ensure more balanced pressure distribution. A robust linear guidance system for the platen or controlling the mould opening and closing sequence with a built-in staged clamp force can also reduce the risk of flash when moulding LSR components. To safeguard the mould, a sensor safety system, known as activeProtect, offers a fast response mould protection system on the IntElect range. Demag will also reveal a new and innovative preferred partnership in the LSR market at the exhibition.

← Wacker opens plant for pyrogenic silica in the US
Silicones: Injecting innovations to advance opportunities in LSR → 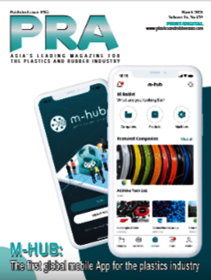