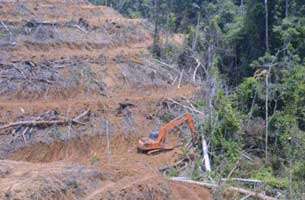 The investigation, which spanned a period of 18 months, initially sparked by Mighty Earth’s 2020 Complicit report, alleges investors in a US$95 million “green bond” used to finance the PT Royal Lestari Utama (RLU) project in Jambi, Sumatra, were misled and not told that Michelin’s local partner had deforested thousands of hectares of tropical rainforest and global priority wildlife habitats prior to the launch of the flagship project in 2015.

Mighty Earth adds that Michelin had claimed to investors that the RLU project would promote good practices for sustainable natural rubber production and support the development of local communities while protecting, reforesting, and restoring crucial habitats for the critically endangered Sumatran tigers, elephants, and orangutans, which live in and around RLU’s rubber plantations.

Michelin had said in a press statement in May 2015 that the RLU project with Barito Pacific would include: “The reforestation of three concessions, representing a total surface area of 88,000 ha, ravaged by uncontrolled deforestation.” But Mighty Earth adds that analysis of historical satellite imagery published in the Voxeurop report found much of the landscape within RLU’s concessions in Jambi was not previously “ravaged by uncontrolled deforestation” at all.

Instead, Voxeurop’s investigation claims that 8,468 ha of pristine rainforests within the concession were industrially deforested to make way for RLU’s monoculture rubber plantations and that, in doing so, vital habitats in Sumatra’s No.1 conservation priority area – including key tiger ranges, elephant corridors, and orangutan re-introduction sites – were destroyed and fragmented. Two highly vulnerable forest-dwelling Indigenous communities also lost their ancestral lands, and other villagers and local communities have claimed they did not give their free, prior and informed consent for these forest clearances.

The RLU project was supported by major organisations such as the UN Environment Programme (UNEP), USAID, and WWF and backed by key banks and financiers such as BNP Paribas, ADM Capital and the &Green fund.

But the investigation published by Voxeurop asserts that Michelin and the Tropical Landscapes Finance Facility (TLFF), which issued the 15-year green bond, knew from an independent assessment report by Earthworm that Michelin’s local partner, Barito Pacific, had intentionally deforested the Jambi rainforests between 2011 and 2014.

According to Voxeurop and an earlier complaint by Mighty Earth, this information was not shared with investors during the sale of green bonds on the Singapore Exchange in 2018 to finance the RLU project – a financial innovation dubbed as “Asia’s first green bond”, and which seemingly complied with Climate Bonds Initiative standards.

In June 2022, Michelin acquired RLU as a sole shareholder, while the entire long-dated green bonds were redeemed and paid back in full to investors, adds Mighty Earth.

Mighty Earth adds that it is calling for:

· – An urgent UN investigation into alleged Indigenous, environmental and human rights violations in the RLU project area in Jambi, specifically those relating to the violation of Indigenous peoples’ rights;

· – The publication of all environmental and social assessments, wildlife surveys, FPIC and community consultation exercises conducted before the launch of the joint venture between Michelin and Barito Pacific;

· – Restoration of environmental damage done and full compensation for all negatively affected communities.

· – Tighter regulation of green bond markets to stop the mis-selling of financial products linked to “sustainable” rubber and other commodity projects without adequate due diligence checks.

· – A formal response to a written complaint submitted by Mighty Earth in March 2021 to the Climate Bonds Initiative, which played a crucial role in rubber-stamping the “green” credentials of the RLU project.